Join us this summer for our wide variety of camp offerings !

Ashley Arlen- graduate of Cascade High School, played in the Big 12 at Iowa State for one year - then attended Wayne State College in Nebraska where she led team to 3 NCAA tournament appearances along with an Elite 8 finish. Continued professionally overseas for 6 years -  played in the top leagues in Romania, Spain Germany, and England and will be heading to Sweden this fall to continue playing.

Compiling some impressive accolades over the years:
NCAA player of the year 2012
First team All-American junior and senior year
Named Romania all star team 2012-2013
MVP of British league in 2016-2017

Ashley will be joining DCBA for a week of girls camp where she hopes to help kids continue to grow their love of the game! With over a decades worth of experience playing basketball at the highest levels, Ashley is a valuable resource to our area and we are thrilled that she will be taking time to teach our youth players lessons she has learned along the way. The goal of the camp is to help kids develop fundamentally. 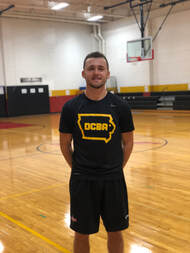 DCBA is excited to be offering a week-long skills camp for area youth boys this summer! The kids can expect detailed coaching from some of the best coaches the area has to offer. This camp will not only provide great workouts each day, but we will also offer instruction for your child to take home and work on their own. Don't miss the chance to sign up!

Program director, Haris Takes is excited to be running the camp alongside coaches who are dedicated to offering great basketball instruction to the youth in Dubuque County! ​
DCBA summer camp.